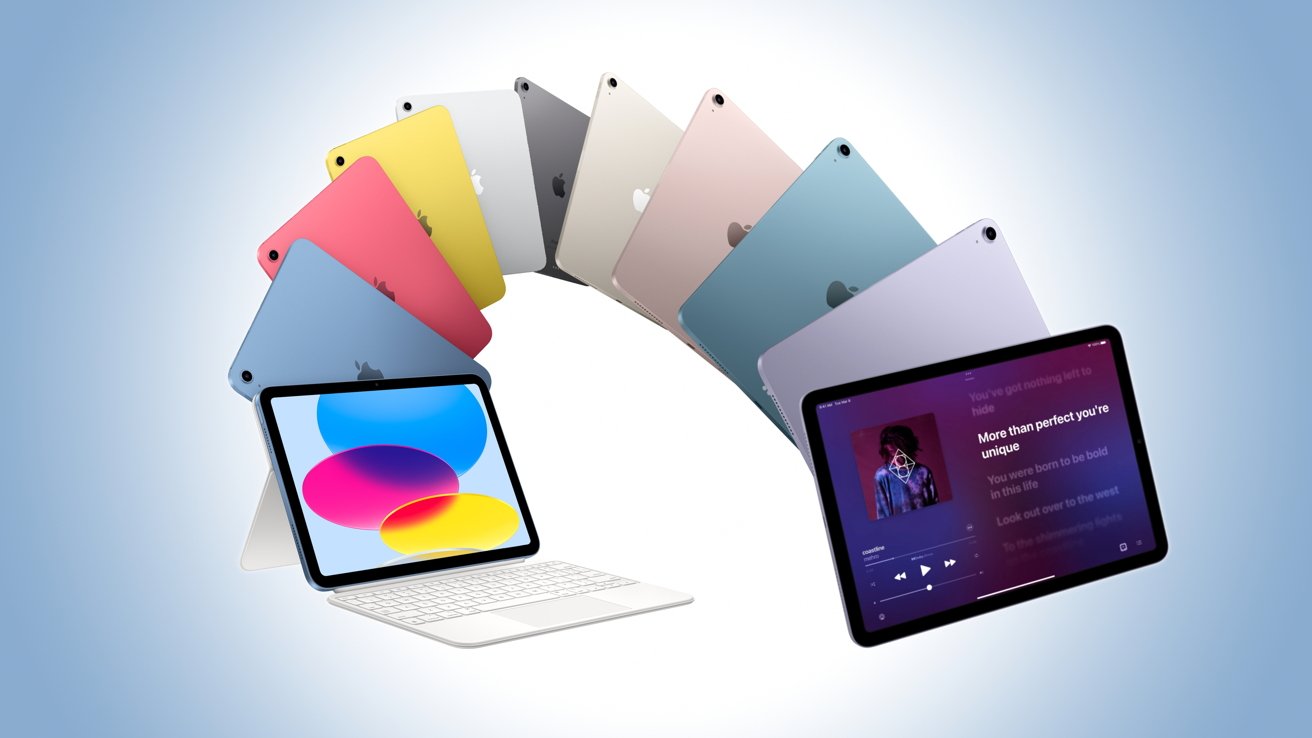 AppleInsider may earn an affiliate commission on purchases made through links on our site.

The redesigned entry-level iPad is closer to the iPad Air than ever. Here’s how they compare.

Apple released two 10.9-inch iPads in 2022 with very different audiences in mind. The iPad Air that debuted earlier in the year is a more premium device, while the 10th-generation iPad is entry-level with a few compromises.

Both tablets in close proximity price-wise is a clear indicator of Apple’s price ladder strategy. By placing a new product between the cheapest last-generation iPad and the iPad Air, it makes consumers more likely to jump to the a premium model than they may have previously considered.

Both the 10.9-inch iPad and iPad Air 5 have their place in Apple’s tablet lineup. Despite similar outward designs, these are very different tablets.

The key differentiators are chipset, display lamination, FaceTime camera placement, Smart Connector location, and Apple Pencil support. These variances explain precisely where each iPad lands in the lineup and its expected use case.

There is very little to differentiate the 10.9-inch iPad and iPad Air 5 at a glance besides color. They have nearly identical dimensions and designs. However, the 10th-generation iPad is imperceptibly thicker and heavier.

The iPad is also heavier by a fraction at 1.05 pounds. The iPad Air weighs 1.02 pounds.

The entry-level iPad was the final product in Apple’s tablet lineup that needed a flat-sided redesign. Until now, it had sported the original iPad design with a Home Button on the front and tapered rounded edges.

The design change also came with a wider color palette. The bright blue, pink, yellow, and silver stand out when compared to the pastel colors of the iPad Air 5.

The FaceTime camera is no longer on the short side of the iPad, but the Smart Connector remains on the bottom edge. These design decisions play a large part in the base iPad’s use case.

The iPad’s display panel is identical to the iPad Air 5, with a couple of important exceptions. The display isn’t laminated and only supports the sRGB color spectrum.

A laminated display, like the one found in the iPad Air 5, enables content to appear closer to the surface of the display glass. The effect pairs best when using an Apple Pencil since it makes writing or drawing feel more natural. Laminated displays are also more expensive to replace than non-laminated, should they break.

Also, the sRGB color spectrum in the iPad is acceptable for most cases, however, artists may miss the wider color space P3 has to offer. The iPad Air 5 has P3 and a laminated display, both features which target artists directly.

The most divergent aspect between the iPad and iPad Air 5 is the processor. The differences are rather extreme, considering the price gap between these products is only $150.

The M1 is a processor revealed in 2020 that was purpose-built for the Mac. It was later introduced in iPad Pro and trickled down to the iPad Air in 2022.

While there is no Media Engine in the M1, media processes will also be accelerated for H.264 and HEVC encode/decode on the M1 versus what is delivered by the A14 bionic. This is yet another boon for artists.

The iPad got an upgraded 12 megapixel rear camera identical to the iPad Air’s rear camera. It has an f/1.8 aperture and can record in 4K at varying frequencies from 24fps to 60fps.

The more interesting story lies in the FaceTime camera on the front of the iPad. Apple has moved it from the short side of the tablet to the long side.

Spec-wise, this front-facing camera is identical to the iPad Air, and both include support for Center Stage. However, the new location is better for use in keyboard cases in landscape orientation.

Apple had been rumored to move the FaceTime camera to the landscape orientation for years. However, it seems to have come at a tradeoff in design for the Apple Pencil — more on that later.

The 10.9-inch iPad is the most recent iPad to get USB-C instead of Lightning. In the long run, this will simplify charging and accessory needs across products by having the same port across iPad and Mac.

In the short term, there’s some confusion and chaos, like with the Apple Pencil — but more on that in a bit.

The battery life is unchanged despite the redesign. Both the iPad Air and the 10.9-inch iPad offer about 10 hours of battery life during regular use.

The wireless capabilities are similar too. Wi-Fi 6 is on both models, and the cellular options use 5G.

The newer 10.9-inch iPad uses Bluetooth 5.2, while the iPad Air has Bluetooth 5.0. This shouldn’t impact users much in 2022, as Apple hasn’t provided any exclusive features tied to the newer Bluetooth version.

The Smart Connector is used on iPad Air and the 10.9-inch iPad but is in different locations. This means accessory compatibility is slightly different across these products despite having near-identical dimensions.

The Magic Keyboard relies on the rear-facing Smart Connector, so the iPad Air is the only one of the pair that can use it. However, both iPads have magnets in the rear casing that should allow other magnetic iPad stands and folios to connect to either device.

Apple introduced a new keyboard for the 10.9-inch iPad with an integrated trackpad called the Magic Keyboard Folio. It attaches via the bottom Smart Connector and has a separate case with a kickstand that attaches to the iPad.

The Apple Pencil situation for the 10.9-inch iPad is complex. The iPad Air 5 uses the Apple Pencil 2 thanks to a dedicated magnetic charging pad on one side of the tablet.

Apple did not include the magnetic charging pad for Apple Pencil 2 on the 10.9-inch iPad. This is likely due to the FaceTime camera moving to where the Apple Pencil magnet would typically be located.

Rather than finding another location for the magnet or offering an alternative pairing system, Apple opted for something less hardware-dependent — the first-generation Apple Pencil. For anyone who wants to use an existing Apple Pencil with the 10.9-inch iPad, Apple sells an adapter with USB-C and Lightning ports for $9.

New Apple Pencil purchases from Apple directly will have the adapter. It may take a while for third party vendors to get the version that has the adapter.

This adapter will connect the original Apple Pencil to the new iPad via a cable for pairing and charging. This is a much less ideal configuration than the Apple Pencil 2 and magnetic charging pad system in other iPads.

Even though the 10.9-inch iPad is technically a replacement for the 10.2-inch iPad, it sits at a different price point. This creates a new price ladder for the iPad lineup that has much closer rungs than it had before.

Not only has Apple increased the price of the entry-iPad, but it has kept the old model around. This is a classic strategy that has been employed by Apple for some time in the Mac laptop lineup.

For those who just want an iPad and don’t care much about the feature set, design, or chipset, the 10.2-inch iPad remains a great option. Consumers will continue to benefit from the low $329 retail price point often made cheaper by sales.

Those who want the latest and greatest tech but still want to be budget conscious have the 10.9-inch iPad. It offers a modern chipset, updated design, and new Magic Keyboard Folio to make things fresh.

The iPad Air is a $150 premium over the new iPad. It has great specs and support for the Magic Keyboard and Apple Pencil 2. The display is ideal for artists, and the chipset is more supportive of artist workflows.

The iPad Pro sits on top of the lineup with all the technologies Apple can bring to bear in its tablet form factor. That lineup has the best display, the fastest port, and (eventual) external display support.

Who is the new iPad for?

The 10.9-inch iPad sits in an odd place in Apple’s lineup. It has a new design but lacks features that would make it more desirable for artists.

The new 10.9-inch iPad is ideal for the education. Parents with a little more money to spend can get their child a new-looking iPad with faster performance, in fun colors without springing for an iPad Air.

Artists serious about drawing or editing on the iPad will likely look higher up the line. There are too many limitations and drawbacks to using the 10.9-inch iPad for art, though it is possible.

Apple emphasizing the new Magic Keyboard Folio also clearly shows that this is Apple’s vision of an iPad as a laptop-tablet hybrid without the pressure of being an artistic tool. The 2022 iPad, as the 2021 before it, is a solid fundamental computer for general work, education, or play.

Where to buy the 10th-generation iPad or iPad Air 5

The iPad 9th Generation is heavily discounted at Amazon, with prices at press time dipping to as low as $269.