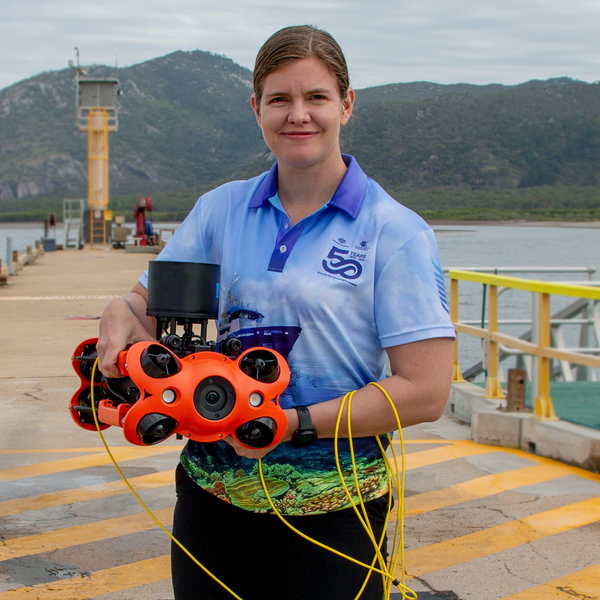 The hot, humid environment of tropical marine areas such as Australia’s Great Barrier Reef can wreak havoc on the marine autonomous systems. Underwater and surface MAS are used for marine monitoring, locating objects such as mines on the seafloor, and rescuing swimmers.

“Tropical conditions can cause systems to overheat or prevent high-density lithium batteries from recharging,” says Melanie Olsen, who is a project director of the Australian Institute of Marine Science’s (AIMS) ReefWorks, a technology testing and evaluation facility in northern Australia. “And the microbial and small creatures that thrive in these tropical environments grow rapidly on underwater surfaces and degrade the sensor performance and the hydrodynamics of the robotics and autonomous systems.”

Developing technology that can stand up to these conditions is part of Olsen’s job, as is supporting ReefWorks’ broader mission of helping others move their autonomous systems out of the lab. It’s essential to test these systems and collect compliance evidence to demonstrate they meet regulatory requirements and can be certified for operations, says Olsen, an IEEE senior member. But there are very few places to test marine robotics, autonomous systems, and artificial-intelligence (RAS-AI) technologies, which hampers the growth of the industry, Olsen says. “It’s difficult for RAS-AI vendors to progress from a prototype to a commercial product because the pathway to a certified system is complex.”

That’s why AIMS established ReefWorks. The facility is used to test crewed and uncrewed tropical and marine vessels as well as robots, sensors, and other innovations. “We are Australia’s—and possibly the world’s—first such testing facility in the tropics,” Olsen says. Examples of underwater and surface MAS include the ReefScan CoralAUV, which is used for marine monitoring, and the Wave Adaptive Modular Vessel, a surface vessel used for marine monitoring, locating mines and other objects on the seafloor, and rescuing swimmers.

AIMS has been testing equipment for over a decade, but this part of AIMS’s facilities opened to the public in December 2021. ReefWorks supports the entire development cycle, from digital-model validation and developmental testing to product and operational-level testing, Olsen says. Physical tests can be done at AIMS’s three marine field ranges, which offer different testing conditions. ReefWorks also has land-based facilities, plus the National Sea Simulator sensor test tank, and drone corridors between the at-sea ranges for verifying the performance of long-range marine autonomous systems.

“Our overall objective is to establish a sustainable marine autonomous systems [MAS] sector in Australia,” she says.

One of the ways ReefWorks helps its users make the most of their time on test ranges is to offer “digital twins” and virtual worlds. A digital twin is a virtual model of a real-world object, machine, or system that can be used to assess how the real-world counterpart is performing.

“Each of our test ranges is developing a digital twin,” Olsen says. “Developers will be able to conduct a test mission on the virtual range so when they get here, they can replay missions with real-time collected data, and validate their MAS digital-model performance.”

Olsen leads a team of five people and is currently recruiting another five. She expects the staff to triple in size in a few years as ReefWorks becomes more established in the region.

An IEEE senior member, Olsen is active with the IEEE Northern Australia Section. She served as the section chair in 2020 and 2021, during which time the section achieved the Region 10 Outstanding Small Section Award.

Before joining AIMS, Olsen spent a decade in Australia’s Department of Defence (DOD) as a lead engineer working on future technologies and maritime electronic-warfare systems.

Olsen grew up in a farming family and wasn’t really exposed to computers or engineers until an EE lecturer from James Cook University, in Australia, came to her rural high school to give a presentation. He brought along a remote-controlled quadrotor helicopter—a decade before quadcopters were commonplace.

The lecture led Olsen to pursue a bachelor’s degree in electrical, electronics, and computer systems, also from James Cook University, in Townsville. She went on to earn a master’s degree in systems engineering from Australia’s University of New South Wales, in Canberra. In 2016, Olsen took a job at AIMS as an engineering team leader in technology development.

“I’m very passionate about new technologies and seeing them integrated in the field,” she says. “During my decade at the [Australian] DOD, I grew my skills in systems engineering to solve more complex technology-integration challenges. AIMS offered me an opportunity to apply these skills to the challenges facing the tropical marine environment.”

“We are Australia’s—and possibly the world’s—first such testing facility in the tropics.”

There are many similarities between what Olsen had been doing at DOD and her role at ReefWorks. “My work at both DOD and AIMS requires an understanding of how electronic subsystems work, determining what’s viable for the use case, understanding the importance of modeling and simulation, and being able to communicate engineering terminology to an interdisciplinary team,” she says. “Both roles are all about engineering problem-solving.”

Olsen is currently working on integrating embedded AI and Internet of Things edge computing into AIMS infrastructure. “Artificial intelligence is used to increase a marine autonomous system’s capabilities,” she says. “For example, AI is used to train a MAS to navigate and avoid colliding with coral reefs, other vessels, or other objects or to allow the MAS to identify specific marine species, reef areas suitable for reseeding, and marine mines.”

IoT edge computing is used to process data closer to its point of origin. “This has the potential to speed up the decision process for vessels and operators while minimizing the communications and data bandwidth needed, which are key limitations when operating in marine northern Australia,” Olsen says.

Since GPS doesn’t work underwater, another of her team’s projects is looking for additional ways to conduct accurate geospatial positioning and control for missions that don’t require marine autonomous systems to come to the surface.

“We’re only just starting to get a feel for what marine autonomous systems can do—not just for our tropical marine waters but in general,” she says. “There are grand challenges no one can solve right now, like dealing with ocean pollution and the impacts of climate change.”

There’s nowhere near enough robotics engineers in the world, Olsen says. She recommends that engineering students take courses that include group projects.

“Group projects help you grow your ability to solve problems outside your knowledge or expertise,” she says. “They teach you how to work as an interdisciplinary team, who to ask for help, and where to find it.”

This article appears in the October 2022 print issue as “Melanie Olsen.”