Apple has continually worked to improve the speed of its iPhone range, boosting the performance with each release. Here’s how far Apple’s A-series chips have progressed in just five years.

Every year, Apple’s newest iPhone models are claimed to be the fastest it has ever made. With the constant development of Apple’s A-series system-on-chip (SoC) to pack more onto the component, this is quite a reliable claim that Apple can lean on.

With the persistent claims of more performance, it can become easy to lose sight of how much of an improvement Apple has made over time. It’s always worth having a look at the past to understand what’s happening in the present, and that’s especially so for Apple’s hardware.

Indeed, it may not just reveal why the chips run so fast now but could also point to where Apple’s future releases could go.

For this dive into Apple’s A-series performance, we will look at the last five years of releases covering six generations. From the modern iPhone 14 to the iPhone X and iPhone 8.

While we could go back further in time, the iPhone X and iPhone 8 signify a big change for Apple’s iPhone strategy in several different ways.

However, before we look into what’s changed over the years, we need to know how much performance has improved.

Analyzing benchmarks is the best way to see how much power the chips have gained over the years. However, that can bring with it a bunch of other problems as well.

For a start, you need to use benchmarking tools that have remained consistent over time. New versions of tools can ship every year or every few years, and changes between versions mean a score from an older version may not be the same as a newer release of the same tool.

To eliminate variance, you ideally need to use the same tool and test it against all of the models Apple has released over time.

Handily, benchmarking tool Geekbench has a list of results for iOS devices that are gathered from user-submitted Geekbench 5 results. One that is also updated very regularly.

Using Geekbench’s data is appropriate, given it’s a very well-known and trusted tool. It also has results for many generations of iPhone, going as far back as the iPhone 5s, but we don’t need to go that far.

The exception to this is the iPhone 14 and iPhone 14 Pro, which have yet to make it to Geekbench’s list. Instead, we will sub in AppleInsider’s Geekbench 5 results for those models.

Since we care more about the A-series SoC in use rather than other specifications, for the purposes of this article, we will generally limit the models to the main releases and ignore Mini and Max models. This is to simplify the list since there’s not much difference between the iPhone 13 and the iPhone 13 mini, for instance, at least not enough to really matter. 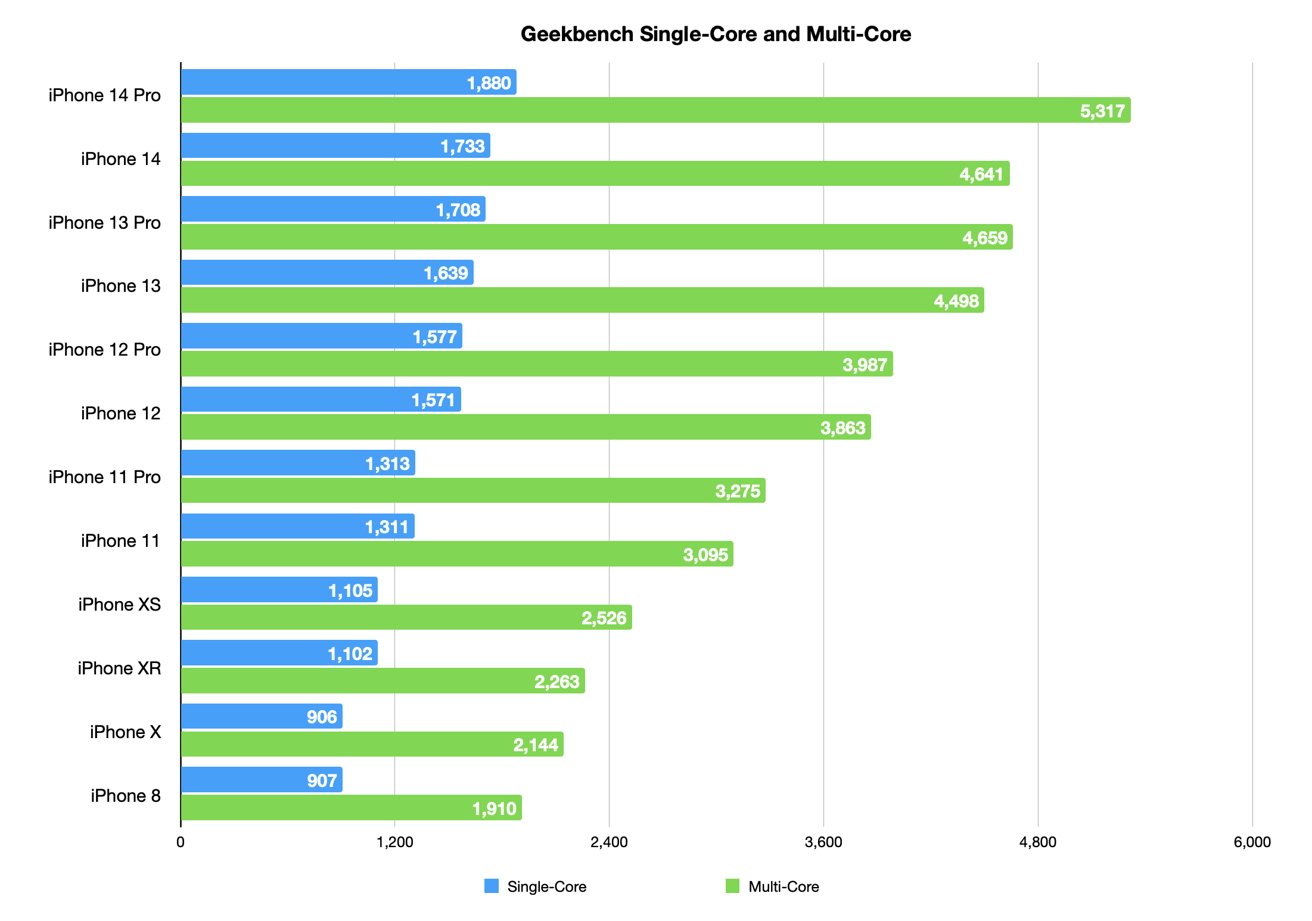 To end users, who are likely to experience single-threaded tasks on their iPhones, the difference is as striking as it is simple. The iPhone 14 Pro is twice as fast as the iPhone X and iPhone 8 in single-core performance.

Turning over to multi-core, the change is more pronounced. The iPhone X manages 2,144 points in the test, with the iPhone 13 getting double the result at 4,498 using its A15 Bionic.

Shifting gears over to graphics, and the change has become even more considerable over a five-year period.

The iPhone X scores 3,890 points under Geekbench’s Metal benchmark. On its own, that’s fairly impressive, but Apple’s almost doubled the score by the iPhone 11 generation, with the A13 Bionic getting 7,315 in the iPhone 11 Pro.

At the high end, the iPhone 14 Pro scores 15,739 under the same test. That’s 4.05 times better performance for graphics than the iPhone X.

These are all phenomenal results, which help provide better user experiences over time and enable brand-new features to appear in later models.

How’d things get so good?

Apple’s progression with its A-series chips is a combination of factors, but it is chiefly down to Apple’s design decisions and technological progressions. With Apple bringing a lot of its designs in-house, there are very few elements that can be affected by external developments.

This tight control enables Apple to build its chips and other hardware in a way that works cohesively and with the intended use-case of the device in mind. For example, despite the massive performance increases over the years, Apple has also done what it could to keep its chips power-efficient, lengthening battery life in turn.

Indeed, its smart thinking informed how it designed other Apple Silicon chips for use in Mac devices, making them highly-powerful and rejuvenating an entire product category in the process. However, as with power efficiency, not every development Apple makes improves speed.

Here, then are the more tangible changes that directly impacted the speed of its A-series chips.

Apple has tended to keep to the same configuration of CPU cores for its iPhone lineup, utilizing 2 performance cores with 4 efficiency cores across the discussed range.

There are changes between the different A-series chips with Apple using various different cores, given names like “Firestorm,” “Blizzard,” and “Sawtooth.” But a more understandable change is that Apple has gradually increased the clock speeds of its cores over time. 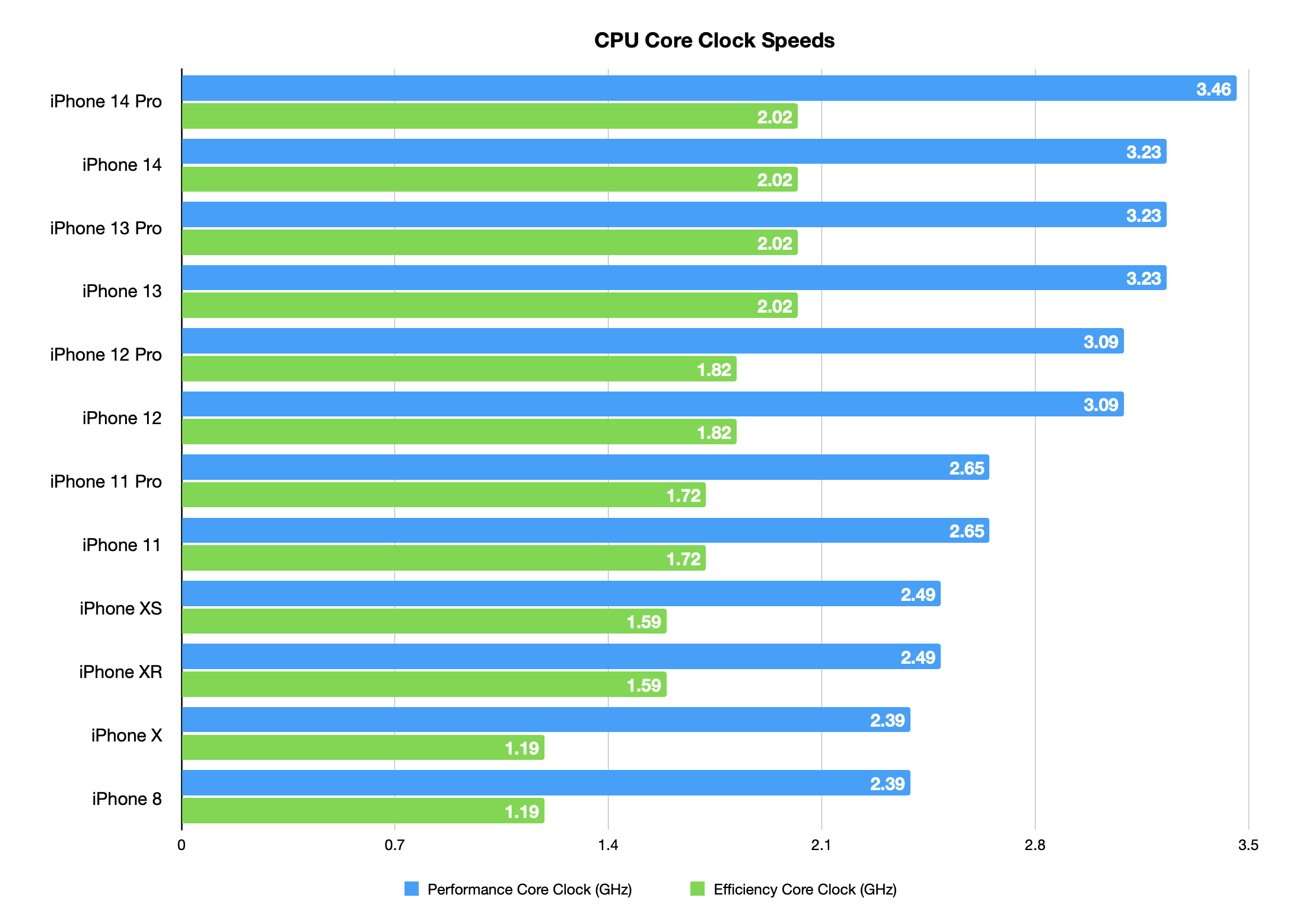 Clock speeds have crept up over time.

It’s plausible that one more generation could result in an efficiency core clock speed double that of its iPhone X counterpart or even matching the performance core clock for the same device.

There’s no doubt that the cores could be performing more tasks over time too, but simply bumping up the clock speed has the same effect.

This ties hand-in-hand with node changes at TSMC, shrinking the size so that Apple could fit more transistors into the same space. There are other benefits, including reduced power consumption and less heat generated by the chip, but transistor density is a big one to have.

There are simply more transistors on the A16 in the iPhone 14 Pro than earlier models.

While the A11 used a 10-nanometer FinFET node, Apple’s A12 switched to 7nm, and Apple stayed at that level until it switched to 5nm for the A14.

While the A16 uses a 5nm process, there is speculation that a 3nm technology could be employed for the A17.

Adding transistors to a chip helps Apple produce more complex chip designs, with more CPU and GPU cores and other parts, all to speed up the processing capability.

Apple’s machine learning element of the SoC, the Neural Engine is used to assist in various tasks that a CPU would normally be very slow at. This element helps with things like image processing, image recognition, Siri’s on-device processing, and so on.

This isn’t a feature that greatly helps with benchmarking, but it’s still considerably faster at tasks that benefit from machine learning.

The Neural Engine has benefited from more cores and better performance over time.

The graphical capability of the iPhone has certainly been boosted over the last half-decade, where it can now generate an image on par with some modern game consoles.

Like the CPU, the GPU of Apple’s own design went through various core improvements over the years, as well as increases in core counts. The iPhone X had a three-core GPU, shifting to 4 by the iPhone XS, and it stayed that way until the iPhone 13.

When it came to the iPhone 14, Apple gave the better A16 to the Pro models, but it did change which A15 it included in the iPhone 14. Instead of sticking to the 4-core GPU, Apple went for the 5-core GPU version of the A15, effectively putting the 2021 Pro model chip in the 2022 non-Pro model.

The GPU performance of the iPhone matches that of some game consoles.

As for what the core changes and core counts did for performance, the number of floating point operations per second (FLOPS) was measurable in the billions for the iPhone 11 and earlier, but trillions after that point.

The iPhone X offered 0.41 TFLOPS, rising to 0.69 TFLOPs by the iPhone 11. The iPhone 12 could manage up to 1 TFLOPS, and there were gradual rises again until the iPhone 14 Pro hit 2 TFLOPS.

An important part of a computer, memory is employed as a high-speed holding area for data, and the more of it there is, the better. On a smartphone like the iPhone, it’s less of an issue since you’re more likely to be using multiple smaller apps than using one that requires as much memory as possible to run.

However, memory capacity doesn’t really impact a benchmark that much either, so it doesn’t play as much of a part in the performance, except if you’re running many different apps simultaneously.

Elements of memory that could impact performance includes the type of memory in use. Except in Apple’s case, it’s less reliable as an improvement as you would think.

This does give the A16 a lot more memory bandwidth to play with, but in repeatedly using the same memory, it won’t have made much of a difference by itself for earlier models.

Given Apple’s extremely long lead times for production, it is almost certain that the next A-series chip has already been mapped out and extremely low-volume test production has begun. It’s also pretty likely that we won’t know exactly what it will look like until September 2023.

But, we can have an educated guess about the next release using historical data.

For example, we see that the benchmark results are increasing at somewhere between 15% and 20% per year for the multi-core result and roughly 10% to 20% for single-core tests.

Given the massive jump in performance from the iPhone 12 Pro to the iPhone 13 Pro, the GPU improvements are more erratic, at between roughly 10% and 50% over the five years. It’s almost certain that the next chip will have better graphics, but pinning down how much that will be is difficult.

The Neural Engine has been at 16 cores for quite a while, and a shift to a higher number could occur if the switch to a 3nm process goes forward. Depending on how many more cores are introduced, this would give a massive jump to the operations per second.

However, while wild stabs in the dark may not be that accurate, there is one thing that we can say as an almost certainty: The A17 Bionic, or whatever Apple calls it, will be the best mobile chip available on its release.